Not quite a vacation from running

This weekend I traded my long run for a longer drive. Friday night, I headed south for the Jersey Shore to reunite with 5 college pals. I packed my running stuff, but had already decided I would gladly bypass running this weekend if the plans of the group did not really allow room for it. I was on “vacation” for the weekend, and that meant staying up late, sleeping in, relaxing in the sun and indulging in a delicious menu (that had been decided days ago).

After 6 hours of mild traffic and rain, I arrived! I ate the plate of dinner that had been saved for me and sat around the kitchen table catching up until well after my bedtime. As we made plans for breakfast, I was asked if I was going to run in the morning. Maybe. Saturday morning, there would be no alarm.
I slept past 10:30 on Saturday morning. And it felt amazing. But after a delicious breakfast of fruit, yogurt and bagels and some time to digest, I was eager to check out the boardwalk – in running shoes. So I got dressed and headed out. 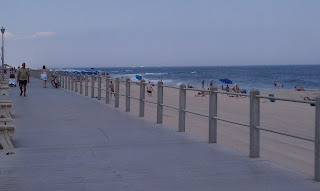 I sort of knew what I was setting myself up for, heading out to run at noon in the middle of July. I had no intention of making this a regular “long” run. The goal was just over 7, and while it would be my longest run of the week, it would only be by 1/10 of a mile. As expected, it was hot. But there was a great breeze from the ocean and for the most part, I was so preoccupied taking in the beauty of the beach and people watching, that I didn’t really feel so bad until about mile 5. The last 2 miles were hot, but by then, I was almost done and back at the house, the pool was just waiting for me to jump in.
Again this morning I had no intention of running. I woke up before most of the rest of the house and decided to actually go for a walk. When I returned home after about 2 miles and everyone was still asleep, I traded my flip flops for running shoes and decided to take advantage one the beautiful scenery one more time. This time, I ran a 5 mile loop that took me through the neighborhood, up to the boardwalk and then back home. Just in time for breakfast.
On my 6 hour drive home today, I had some time to think about what a great weekend this was. I love my running routes and routines here in Boston, but it was really fun to trade in a few miles for a new place to run. What a treat to have such a beautiful weekend, with great friends…and still squeak in a few runs!

Tweet
← 33 for 33
Running again with an old friend and Happy Birthday DAD!! →